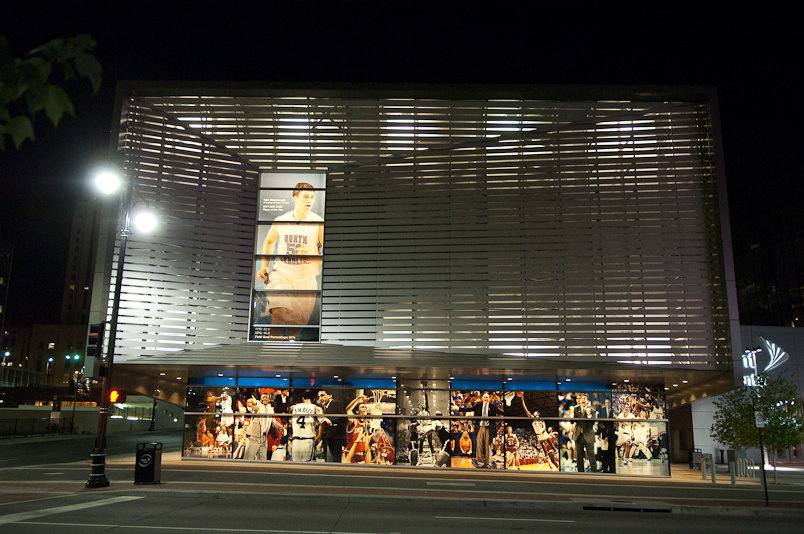 Pictured Above: Further cementing the areas reputation as a hoops hotbed, Kansas City is now home to the state-of-the-art College Basketball Experience (CBE). Connected to the new Sprint Center arena via a common lobby, the 41,500-square-foot entertainment facility contains hands-on, interactive basketball exhibits and houses the National Collegiate Basketball Hall of Fame. The Kansas City Power & Light District or Power & Light District is a shopping and entertainment district currently in Downtown Kansas City, Missouri, USA, developed by the Cordish Company of Baltimore, Maryland and designed by 360 Architecture. The district comprises nine blocks on the south side of the downtown loop. It is is located between Baltimore Avenue to the west, Grand Boulevard to the east, 12th Street to the north, and Interstate 670 to the south.[1] The $850 million mixed-use district is one of the largest development projects in the Midwestern United States[2] The Power & Light District ise one of only a few places in the United States where possession and consumption of open containers of alcoholic beverages are allowed on the street, although they remain prohibited on the street throughout the rest of Kansas City. The Northland is the part of the Kansas City metropolitan area that is north of the Missouri River, primarily Clay and Platte counties. Each county and cities within are: Clay County Excelsior Springs Gladstone Kearney Liberty North Kansas City Smithville Platte County Parkville Platte City Riverside Weston - JCI Photo Jesse Knish